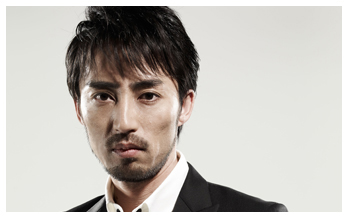 Tomoya Nanami, born on September 3, 1974 in Gunma Prefecture, started playing soccer at the age of 9, his genius flowered as a forward, and he participated in prefectural and national tournaments as a member of powerful school teams all through grade school to high school. Though he did modeling for magazines and other areas after college, he started pursuing a career as an actor. Currently he works extensively as an actor for movies, TV, dramas and plays. In Godzilla: Final Wars, Lorelei, Samurai Commando Mission 1549, LOVEDEATH and other movies, he performed in action scenes by himself. Recently he keeps being cast in movies directed by Ryuhei Kitamura who has been in great demand in Hollywood. For a year started from April 2006, he had experienced mountain biking, wakeboarding, surfing, climbing, snowboarding and skiing with professional players for the official blog for "X-Trail" by Nissan. He demonstrated his innate athletic abilities in each sport, which was greatly complimented by professional sports players